Any English major might be able to tell you that the title of this blog feature is a reference to the first line from the prologue to Shakespeare’s Romeo and Juliet: 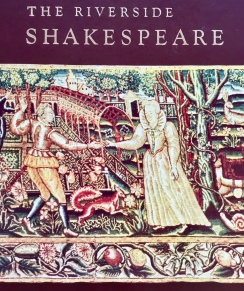 “Two households, both alike in dignity,  In fair Verona, where we lay our scene. From
ancient grudge break to new mutiny, Where civil blood makes civil hands unclean. From forth the fatal loins of these two foes A pair of star-cross’d lovers take their life…”

I was a bit enthusiastic to break out my edition of the Riverside Shakespeare to review these lines. So where am I going with this? If you’ve read the previous blogs, you know CKCB is presenting many of Leonard Bernstein’s most loved selections on May 6 at 3 PM at the Lexington Opera House. One of the most well-known of his works is West Side Story. That Broadway play itself was informed by Romeo and Juliet. (R&J was itself informed by a 3,000 line long poem–thanks, Riverside–so nothing is new in Hollywood, Broadway, or Verona, for that matter.) But a great play is a great play, and great music is great music.

Les Anderson is the assistant conductor for CKCB and will be conducting Bernstein’s Symphonic Dances from West Side Story.

Says Anderson of the selection, “Symphonic Dances from West Side Story is taken directly from the 1961 movie that won 10 Academy Awards, including Best Picture, becoming the record holder for the most wins for a movie musical. The film has been deemed ‘culturally significant’ by the United States Library of Congress.”

When announcing the Bernstein playlist, Anderson was enthusiastic about conducting the piece.

“I saw the musical for the first time when I was ten years old, and I was awed by the music and story. That is why this performance is a ‘bucket list’ event for me.”

The band has been working very diligently on this selection. Bernstein’s mastery of sound and musical story-telling translates into very specific musical markings–entrances may be anywhere in the measure– and features many musical styles,  instrumental “special effects” and unconventional time signatures.

Says Anderson of the difficulty of the selection, “This arrangement by Paul Lavender is true to the original music and not ‘watered down’ to make it easier for the musicians. As I told the band–this will be a growth experience for us all. The music has many challenges in the form of complex rhythms, several key signature changes, and tons of accidentals. Our players have lots of solo spots and technically difficult passages to play. The music is exciting, dramatic, and heart-rending. We hope that our performance will bring back memories of the listener’s experiences with West Side Story and its emotional impact.”

As with Anderson’s desire to perform West Side Story, Bernstein’s Divertimento for Orchestra (transcribed for symphonic band) is another selection that has been on CKCB conductor Ben Hawkins’ “to do” list. The Divertimento was commissioned by the Boston Symphony Orchestra on the occasion of its centennial. (Shameless plug: readers of this blog and faithful audience members of the band will remember that the CKCB commissioned a piece for its 40th anniversary–A Bluegrass Overture by Philip Sparke.)

Says Hawkins, “The Divertimento is a ‘first-timer’ for me, and a piece I have always wanted to do.”

The band is also performing Bernstein’s  Suite from Mass. Says Hawkins of the Suite, “This new arrangement of the suite struck me immediately as a great opportunity to pair the band with some fantastic players from our community, the University of Kentucky Faculty Brass Quintet.”

The CKCB is ecstatic to welcome quintet members Jason Dovel and Abby Temple on trumpet; David Elliott on horn; Bradley Kerns on tenor trombone; and J.D. Handshoe on bass trombone to the Lexington Opera House to perform Suite from Mass with the band.

Hawkins places much thought into programming the music for the concerts. He considers both the educational and aesthetic experience of the band, and the general enjoyment and spectacle of the selections for the audience.

Says Hawkins of his reasons for selecting  an arrangement based on Mass: A Theater Piece for Singers, Players and Dancers  for this concert, “Mass premiered at the opening of the Kennedy Center in Washington, DC, in 1971. It was commissioned by Jackie Kennedy. Although based on the Latin Mass, it introduces theatrical elements, as well as original text in English, including a snippet of verse by Paul Simon. Although I have never seen Mass performed, I was in high school in the DC area at the time of the premier, and have strong recollections of the excitement surrounding the opening of the the Kennedy Center.  A  number of revivals of the complete production have taken place during this Bernstein centennial year. I suspect that they won’t be the last. If nothing else, A Simple Song will always be in the vocal repertoire. It ranks right up there with West Side Story‘s Somewhere in its direct emotional message and melodic beauty.”

Hawkins notes for all the selections in this concert celebrating Bernstein’s 100th birthday, “These pieces represent a nice sampling of both his concert music and his music for the theater.”

Even though things didn’t work out for Romeo and Juliet, or Maria and Tony, for that matter, the CKCB guarantees a great afternoon of Bernstein. But please, if you are of the House of Capulet or Montague, or a Shark or a Jet, rumble after the concert.

Interested in joining us for an afternoon of music? The Central Kentucky Concert Band will be performing many selections by Leonard Bernstein on Sunday, May 6 at 3 pm at the Lexington Opera House. Admission to the concert is free and no tickets are required.