In December, among other selections, we featured Shostakovich’s  Finale to his Symphony No. 5, and Goedicke’s Concert Etude featuring the band’s very own principal trumpet player T.J. Thomas as soloist. In March, we marched with Trauermusik by Wagner,  March to the Scaffold by Berlioz, The March from “1941” by John Williams, and the finale to Tchaikovsky’s Symphony No. 4. May came, and with that, the band paid tribute to one of the greatest American composers to date: Leonard Bernstein. The band transferred operations to the Lexington Opera House and performed The Symphonic Dances from “West Side Story,” Divertimento (written for the Boston Symphony Orchestra on its 100th anniversary by Bernstein), and Suite from “Mass” that featured the phenomenal University of Kentucky Faculty Brass Quintet as special guest performers.

The band rehearsed for these concerts practically every Thursday from early September to the day of the concert. Hours upon hours. Members practiced at home for hours honing transitions, key changes, intervals, and other technical musical elements in the selections placed there by the composers and the arrangers.

Our conductor and assistant conductor put together programs, led rehearsals and made massive notations in the scores to help the band craft a holistic musical experience rather than just repeating a sequence of tones. The musicians in the band worked very hard to perfect this expression, too. 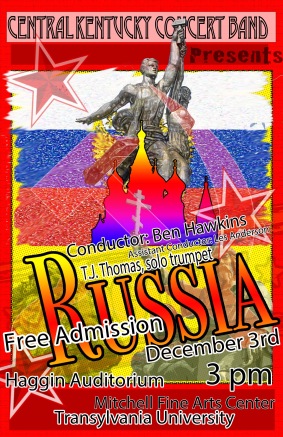 Band members moved chairs, stands, and percussion equipment. Family members took care of family business while band members rehearsed. Family members also provided financial and emotional support. Crews at the band’s venues (Transylvania University and the Lexington Opera House) configured stages, provided lighting, sound, and assisted with the heaps of paperwork that goes into putting a performance together. During all of this, a special committee was formed and, with the band’s input, rewrote the band’s bylaws and organizational structure to ensure the band’s continued vitality and continuity for the next several decades.

Throughout all these labors, what unites us and makes us a family is this: a love for hearing, making, and sharing music. That’s really it.

Through the generosity of our sponsors, band members, family members, friends, and associates, we are able to offer the audience the gift of music.  It’s easy to overlook the value of this gift, as one cannot take it home in a bucket, or park it in a garage, or hang it over a fireplace. But the power for change–such as emotional, political (just ask Shostakovich, whose very life depended upon pleasing Stalin through his compositions), and cognitive (research is providing many insights into the interaction of performing music on developing and developed brains) afforded by music is undeniable.

On behalf of the band, I thank each of you for your contribution to the band’s mission, whether you are a valued audience member, band member, family member, sponsor, venue affiliate, or have in any way forwarded our band’s mission. Playing Bernstein’s West Side Story this last concert has given us an insight into the possibilities of story-telling through the emotional, social, and perhaps innate sensibilities we possess of making music. Each of you has written a note in the score that tells the story of our band. We have been composing this score for over 40 years, and we do not yet see the double bar line.